The world’s hottest offshore prospect for oil companies is off the coast of Guyana, where a string of major discoveries has drawn hundreds of millions of dollars in a quest for crude.

The Trump administration is hoping to lure some of that investment to the U.S. with a proposal to sell leases in almost every inch of the nation’s outer continental shelf -- including territory hugging the U.S. East Coast that shares characteristics with Guyana, a tiny South American country.
Geologists speculate that those U.S. waters could hold an equally tantalizing amount of crude oil and natural gas. But oil companies may not be willing to endure the high production costs and public opposition to find out. Gushers of litigation are more likely than gushers of oil.

"The industry’s focus is elsewhere, and just because the government says you can drill doesn’t mean companies will do it," said Pavel Molchanov, senior vice president at Raymond James Financial Inc. Companies have no shortage of other prospects around the globe -- without the costs and risk of the American East Coast, Molchanov said. 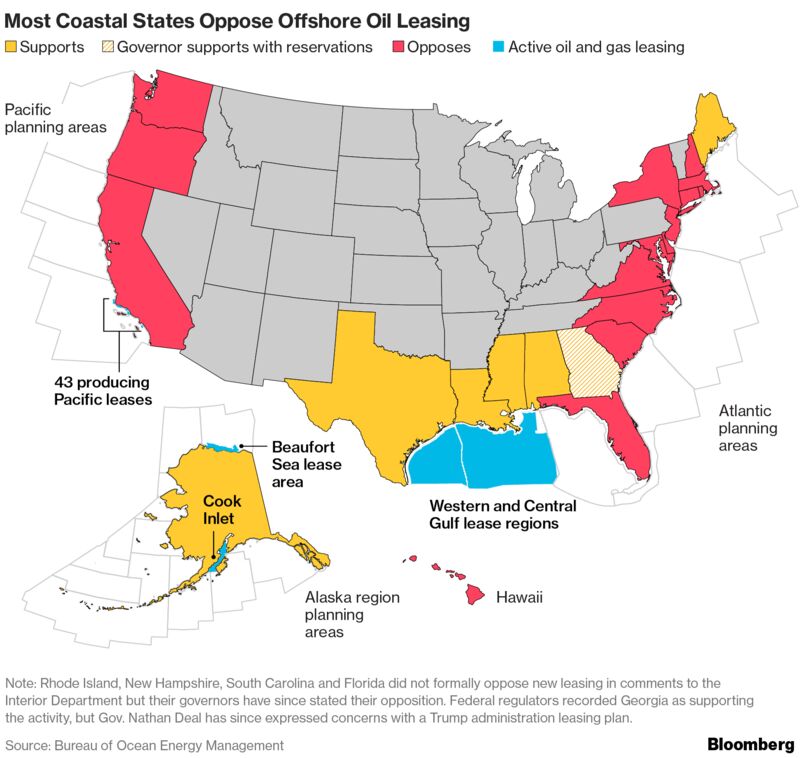 Drilling there could mean overcoming -- or at least ignoring -- the objections of every state government on the East Coast except those of Georgia and Maine, as well as widespread public hostility. More than 140 municipalities from Florida to New York have declared their opposition to offshore drilling, according to the conservation group Oceana.

That’s a significant barrier. Although the Interior Department can still sell offshore tracts over the objections of affected governors, states could make things difficult for oil companies that would have to stage equipment near offshore drilling operations.

Almost certain lawsuits by environmental groups, state attorneys general and other drilling opponents could undermine lease sales and stall drilling, mirroring how seven years of litigation threw into jeopardy leases in the Chukchi Sea near Alaska that were sold in 2008.